The Life and Career of Harvey Miller: Bankruptcy DeanGeneral Counsels: Avoid ''Club Fed''Carpenter Legal Search, Inc.Evers Legal Search, Inc.I am a senior associate with about $80,000 in portable business. Is that good enough?
< Back To All Articles

Share
Tweet
Linkedin
5564 Views
( 280 votes, average: 5 out of 5)
What do you think about this article? Rate it using the stars above and let us know what you think in the comments below.
If you're looking to jump to a corporate counsel position, it's important to see how well the company in question pays before you make the leap. 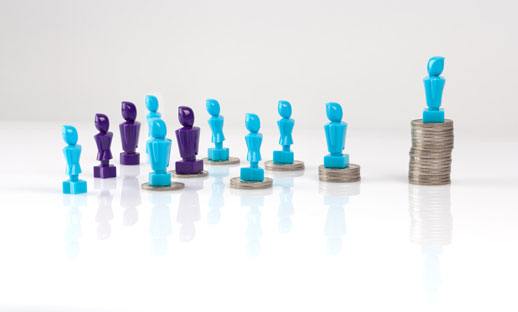 So when Hildebrandt International ran a survey this past September on corporate counsel pay, some interesting things jumped out.

Hildebrandt surveyed 223 companies and found that in-house attorneys are doing fairly well, as compared to their law firm counterparts. The companies surveyed were generally large companies, with revenues of around a billion dollars or so. So, the survey's results are not typical of smaller companies with smaller legal departments.

Even so, the data is interesting. The in-house attorneys surveyed make an average of $236,000 per year in pay and bonuses, up from the $226,000 reported in the previous survey. General counsel pay, meanwhile, increased 14%, up to around $700,000, and chief legal officers — the head honchos — average around $900,000. That's not too shabby, though such officers are the first in line for backdating options scandals.

At the highest paid end of the spectrum, long-term incentives are even better — general counsels make around $1.5 million per year, while chief legal officers rake in almost $2 million.

What's more, demand for general counsel, except of course at financial institutions at the moment, is increasing. Over 6% more money was spent on in-house legal counsel than in the previous year.

Outside law firms, on the other hand, were expected to take a hit, with about 30% of companies saying they would decrease their outside legal spending.

So what does this all mean? Outside of financial sector firms such as Lehman Brothers, in-house counsel use appears to be growing. This makes sense, as the spiraling costs in associate salaries have spiked costs to companies. Moving more legal work in house, where the company can control legal costs to some extent, is a somewhat predictable result.

But that doesn't mean such work is easy to get. The survey also showed that the median company has almost four lawyers per each billion dollars of revenue. That's not very many, so there aren't that many positions available overall. This depends, though, of course, on the company — an aggressive company with lots of legal issues, such as Apple Inc., will have a much greater need for in-house counsel than many other companies.

In-house counsel jobs have a lot of perks, even if they generally offer a smaller salary than jobs in big law. While there is a lot of work, there is no billable hour requirement, and that alone can make life easier.

For smaller firms, the numbers noted above will of course be smaller. But still, the life of an in-house lawyer may well make it worth it. The pay is far from bad, and you might even have a life.

The best part about LawCrossing is its regular and timely updation of each and every segment on the site.
Chad